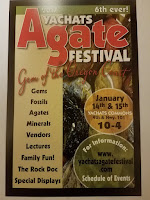 Join us for the 6th Annual Yachats Agate Festival January 14th & 15th at the Yachats Commons Hwy 101 at 4th.  This is the first show of the new year and is an excellent opportunity to learn about beachcombing for agates to zeolites and other stones found along the Oregon Coast.

The Rock Doc will be on hand Saturday and Sunday to identify a couple (not a suitcase full) of your coastal rock finds for you. Sunday the Oregon Fossil Guy will also be on hand to identify your fossil finds as time permits 10 - 4.

Free admission to the Yachats Agate Festival inside event of lectures, dealers selling jewelry, rocks, minerals and fossils a great outing for the family. This event is put on by Yachats the "Gem of the Oregon Coast" celebrating the treasures of the Oregon Coast.
Posted by K. at 1:24 PM 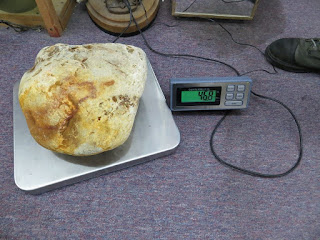 This huge trophy agate was brought in to Wesley's Trading Post by Valerie from Portland Saturday May 7th. She said her husband found it sticking out of the sand and had to dig it out and they were amazed at how big it was 46.8 pounds. From a beach on the coast near an RV park. You can see some the bruising that I have described in the past as looking like fingernail indentations in the rind and exposed patches of the agate and drusy crystal – quartz looking patches so not sure what is inside.

EDITORIAL NOTE: Sorry I took so long to open the photos that Patty Bullock supplied.
﻿

Tuesday Evening May 26th will be the last in this years series of talks on Coastal Encounters.
Lincoln County author of Agates of the Oregon Coast Kay Myers will present Beach combing 101, finding agates on the Central Oregon Coast.  This presentation with video will be held at the Driftwood Public Library in Lincoln City Tuesday evening at 6:30 PM.
Posted by K. at 9:38 PM

As I haven't been out on the beaches in quite awhile, check us out on Facebook for the most recent details of beach combing on the Oregon Coast.  Happy holidays to all of you folks and stay safe!
Posted by K. at 3:28 PM

This was a first for me to see and what a treat. Sandra shared her fossil conifer cone she had found while beach combing on the beach at Moolack.  Congratulations to Sandra on her prize find.
Posted by K. at 7:19 PM

Rockhounding Oregon, Hot off the Press

Thank you Lars, we just received our autographed copy of Rockhounding Oregon today! Great job this makes a great companion book of locations to go with our pocket guides Oregon Under Foot and Agates of the Oregon Coast. We should have copies for sale next week at Wesley's Trading Post 136 SE 1st St here in Newport, Oregon.  541-265-4556.
Posted by K. at 7:27 PM