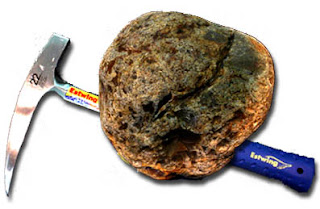 Nice 11 pound sard or butterscotch jasp-agate found Wednesday by local resident Patrick on the beach south of Newport!
Posted by K. at 12:23 PM

Thank you Larry for sharing your copy and making us aware that there is a new issue of Gold Prospectors The Magazine for Gold, Gem & Treasure Hunters, featuring a good article Newport's local Moolack Beach fossils by Garth Rimble. Another feature article is on the the Oregon State Gemstone Oregon Sunstone by Carrie Milanoski. Great reading for our rock hound friends and beachcombers alike!

Now regarding local info: last week we had folks coming in with agates that they had found. A couple of ladies had found some black agates (first one over a quarter of a pound and her second one was over one pound). Another gentleman also reported having had good luck that day also. More often than not the norm has been sparse collecting for very very small pea sized agate and some small jaspers!

Cape Perpetua Scenic Area ~ Events: We are having some very early minus tides so Tidepool Discovery Day - will be Saturday, August 22 from 7 a.m. until 9 a.m. Naturalists will be stationed at the tide pools from 7 to 9 a.m. to share the wonders of the tidepools and the life forms that inhabit them.

Films and hikes highlighting the entire Scenic Area will also be available at the Visitor Center Theater from 10 a.m.-5:30 p.m.
Posted by K. at 9:49 AM 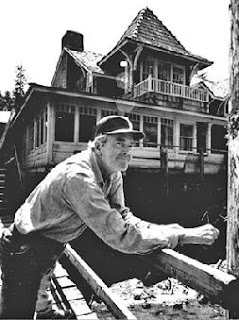 During his time spent in Lincoln County, to film the movie Sometimes a Great Notion, Henry Fonda filled his spare time as he sketched watercolors and collecting agates. He bought himself a tumbler to polish his rocks.


EDITORS NOTE: The photograph accompanying this article is courtesy of photographer Gerry Lewin. Lewin was a staff photographer for the Salem Statesman in 1970 and covered the event for the paper.
Posted by K. at 10:12 AM

Not bad, this makes the third blue agate that has been brought in this summer! Notice the concentric banding of white around the blue bubbly orbs (this is a botryoidal form of agate). Lucky beach comber Eileen from California found this agate beauty north of Newport.
Posted by K. at 11:11 AM 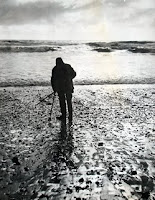 A couple of weeks ago an entire week here in Newport, Oregon was a celebration of Ernest Block, the composer who also was a photographer, an agate and a mushroom hunter. He lived here in Agate Beach from 1941 until his death from cancer in 1959.

According to his grandson Ernie, "He would go down to the beach hunting for agates, then he would polish the agates that he found on the beach, one at a time. Bloch apparently believed in a theory that keeping the hands busy allowed musical ideas to germinate and mature."

It must have worked. He wrote about one-quarter of his works at Agate Beach, including by some accounts some of his best pieces, such as the Jewish-themed Suite Hébraïque in 1950 and the second Concerto Grosso in 1952.

Bloch relished the beach. He used to read Walt Whitman there. Which is why, on the Ernest Bloch Memorial at the Newport Performing Arts Center are lines from Whitman saying, "Give me solitude, give me Nature ... "
Posted by K. at 1:25 PM 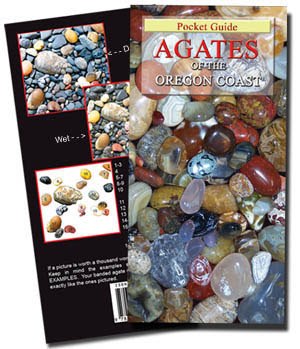