Spring break on the Oregon Coast 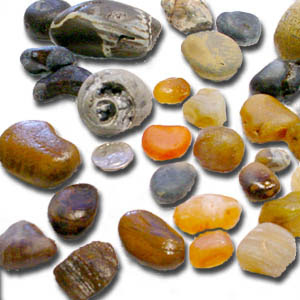 The low tides of spring have blessed the beachcombers with many treasures this spring. We are in the midst of 6 weeks of spring break here on the Oregon Coast.

Local beachcomber Lisa, just found these beautiful trophies and a whole lot more than the camera could hold today. Upper left shows some of her fossils, the largest fossil is about 1/3 of a Musashia indurata shell, and various other shell fossils (I threw a quarter in the photo just for scale). The lower left shows some nice petrified wood scattered in among the agates.

Weather has been wild and wonderful for storm watching too!
Posted by K. at 3:05 PM 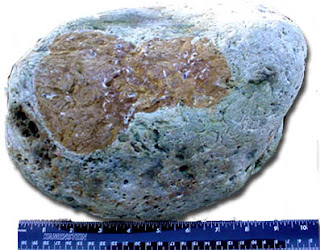 It has come to our attention that there is rock showing for good beach combing on many of the Lincoln county beaches. This is just a sample of a 43 pound multicolor jasper recently found by Brent, one of our local beachcombers. Boy that's a back breaker for you!

Please do not use private property to access the beach. We have just been notified that the land owners south of Newport known as the 'airport beach' are no longer tolerating trespassing and are starting to site folks. Previously these owners allowed/ignored access through their 'for sale' property, and now police are watching and siting. We don't want to loose our rights as rockhounds to hunt on the beach so please use common sense and respect others peoples property. It just takes a few to mess it up for the rest of us.
Posted by K. at 10:02 AM 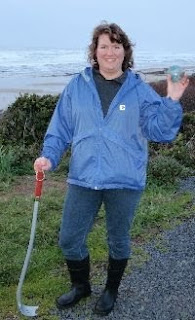 Congratulations to all three groups of guest this weekend reporting finding old Japanese glass floats from 3"-10" in the Newport area! Here is a picture of Lauri and her glass float that she found on Moolack Beach during the Oregon coast discovery season. The float is 3" in diameter and blue with a hint of green. Craig and Lauri of Albany decided to look in the rocks at the top of the beach like they were told to do by FACETS Gem & Mineral Gallery. Just as they were ready to head to the car from their fun activity, BAM, Lauri finds the glass float sitting right up on top of the rocks. Nice find there girlfriend!!!
Posted by K. at 12:40 PM 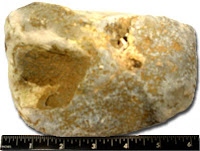 Agate found on the central Oregon coast, this 3½ pound agate was just found by Newport residents Greg & Cheryl, it has yet to be cleaned more but upon close inspection it appears to be ice blue in color. 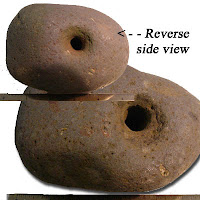 This is a rare treasure that was also found on the beach at Newport. This is a 3 pound piece of green basalt that has been worked with a drill appears to be Indian artifact, possibly a sinker for a fishing net? 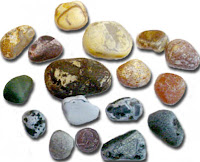 Rock Candy? Butterscotch? Here is just a few of the Beach combing treats found last week by Tim, while he was collecting from Yachats to Lincoln City. They look good enough to eat.

< - - Editors Note: There is a quarter at the center bottom for scale. 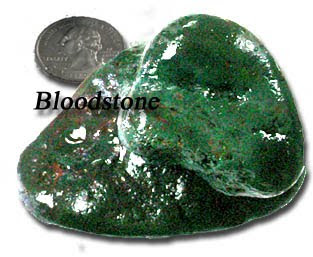 < - - Green stones shown are two nice specimens of bloodstone a.k.a. heliotrope, jasper found lately in the Newport area by the father & son team of Frank & Jeremiah. Good timing fellows bloodstone is also one of the March birthstones. 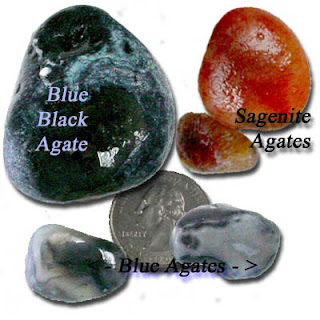 Pleasures await you by the seashore! 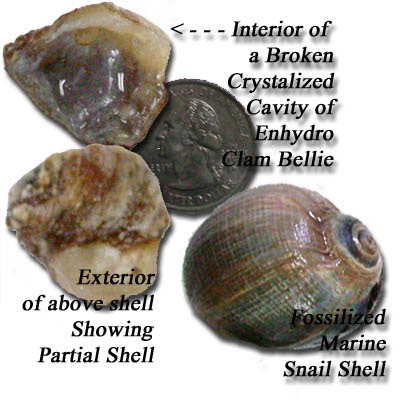 Sorry I had a shipment going out at the time a lady came in with a complete fossilized Nautilus that she had just found here in the Newport area. The nautilus was a little larger than a quarter and in very good condition, still had some matrix rock attached to it, but the iridescent shell was complete and spectacular in color and condition. Unfortunately I had to run and help with the freight, so no photo. Well that's another reason to go beach combing for those unexpected treasures from nature here on the Oregon Coast.