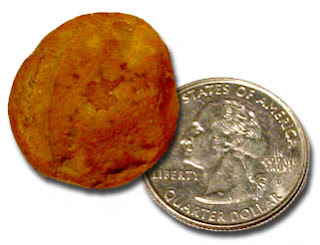 Susan of Florence did it again two weeks ago beachcombing on the Oregon coast. The discovery season uncovered a very bright and colorful, patterned, sard colored agatized bivalve (clam) bellie, the size of a quarter. 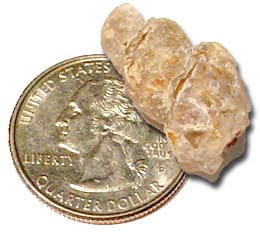 Her good eyes also brought Susan another incredible find...this beautiful icy clear agatized gastropod (sea snail). To see this piece in person the close-up details on this piece are incredible. When held to a bright light, it appears to be a light lavender color, with what appears to be finely cut crystal detailing within in the agate. Usually these snails appear to be white smooth cloudy agate. 2 more great finds Susan!
Posted by K. at 2:27 PM 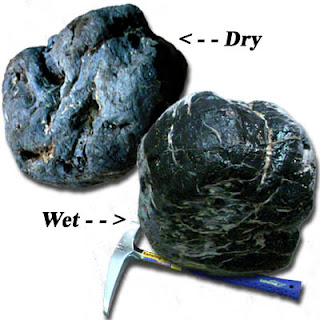 Just in yesterday: this trophy sized petrified wood was found by Dane, a north county resident earlier this year, here on the Central Oregon Coast. This is the biggest piece we have seen so far weighing in at just under 72¼ pounds, looks to be part of a very large limb or a part of the tree trunk. The color is actually blue grey measureing 11" x 12" and wet as you see it (as seen for scale over a large full size 22 ounce geologist pick for scale) it takes on a black with beige wood grain pattern running through it. It looks like it might be Spalted Myrtle an Oregon Myrtlewood.

This was found by lucky beachcomber Dane, a north county resident. It took him three hours to carry it home from the beach. What a determined guy he is.
Posted by K. at 4:16 PM

Have you read the latest Rock & Gem (October issue) magazine yet? They have a wonderful article on the Origin of Agate, written by Steve Voynick a mineral collector and former hardrock miner. For all of you that want to know more on the formation of agate this is an article you won't want to miss.

Here on the Oregon coast the rockhounds are all anxiously awaiting the scouring of the beaches for the agates and the fossils to reappear for all of our beachcombers to experience treasure hunting during the discovery season now through May.
Posted by K. at 12:01 PM