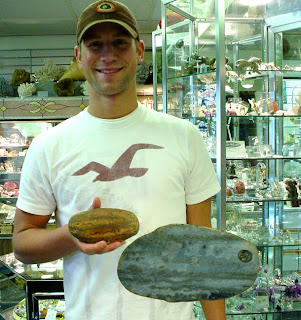 Exciting find of a 2.2 pound agate found just north of Newport , Oregon August 2007. I identified it as an agate but thought it would be a carnelian agate, due to the exterior color.
Ray took it home and it was the first rock that he ever sliced, just removing the heal he exposed the most unsual agate found in the area. It was not carnelian (red-orange) but BLUE as like blue lace agate but with spectacular ribbons of pyrite dendrites running through it!
He brought it in to the showroom and we polished the exposed face of it to bring out it's true beauty.
Posted by K. at 3:14 PM