Facing the threat of cloudy skies and rainy conditions on much of the coast, more than 3,700 beachcombers volunteered for the 25th anniversary of the SOLV Great Oregon Fall Beach Cleanup on Saturday. The entire Oregon coast, over 362 miles, was cleaned of debris that had accumulated since last spring. Volunteers removed an estimated 54,460 pounds of trash from Oregon’s beaches.

The SOLV Great Oregon Beach Cleanups occur twice a year when thousands of volunteers head to their favorite spots on the coast. Every beach is cleaned up of litter and marine debris, from the California border to the Columbia River.

Founded in 1969 by Oregon Governor Tom McCall to address litter and vandalism problems, SOLV’s mission has expanded to reach every county in the state and brings together government agencies, businesses and individuals in projects to enhance the livability of Oregon. Governor McCall also signed the 1967 Beach Bill into law, creating the Ocean Shore Recreation Area, managed by the Oregon Parks and Recreation Department for the benefit of all Oregonians.
Naturally the weather was picture perfect for sunday, monday & tuesday with a high of 90 degrees Monday here in Newport. September and October kicks off the lower rates at the coast and generally offers our guest to the coast better weather than June - Labor Day. Now we are all waiting for the great storm watching weather to start the beachcombing season for the agates to be exposed (removal of the sand by the storms to expose the gravel beds).
Posted by K. at 1:21 PM 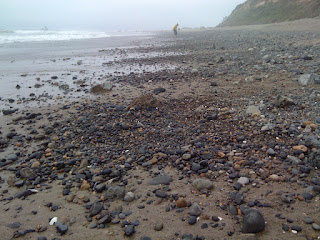 Thank you to local beachcombers Linda and Mike for sharing your photo with all of us that others too may see what our Oregon shores looked like a few weeks ago. This was not the norm for the summer time but an exception!
Today and for the weekend we are having more minus tides again. Maybe some of us will be lucky and find some treasure in the tide pools again. However we are all anxiously awaiting to see what the winter storms will uncover.
Posted by K. at 9:33 PM

Not a Turtle Fossil found on the Oregon Coast 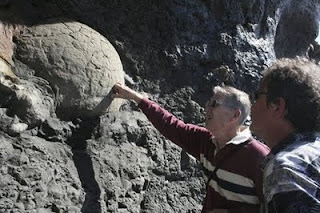 Updated from: Lori Tobias of The Oregonian Latest info on this is that it is NOT a turtle after all as it was thought to be in the story below!

William Orr, state paleontologist; Bill Hanshumaker, marine education specialist at the Hatfield Marine Science Center; and Guy DiTorrice, an avocational paleontologist, visited the site Tuesday the 15th together at low tide. They wanted to more closely study what local beach walker Carol Ritzert reported finding about a month ago. Ritzert had watched erosion reveal the rounded formation for about one year.
Scientists think this fossilized tortoise found along the beach in Lincoln County may be 20 million years old. The domed back of the stone, which measures roughly 30 inches long by 24 inches wide, suggests it was a land turtle.

"Oregon's Fossil Guy" Guy DiTorrice says the last time a discovery of this significance was made was in the 1970s, when Guy Pierson, also an avocational paleontologist, found a seal or sea lion of similar age near Newport. Parts of that fossil are at the University of Oregon museum and the Smithsonian. 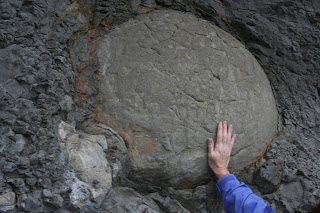 "This is big," says Bill Hanshumaker, marine education specialist at the Hatfield Marine Science Center. "I've never seen anything like it before."

Time is of the essence to preserve this fossil in order to save it before it is lost by nature and erosion or destroyed by humans, DiTorrice and Hanshumaker hope to see it displayed at the Hatfield Marine Science Center at Newport.
Editors Note: by Lori Tobias, The Oregonian Saturday September 05, 8:05 PM and Tuesday September 15, 2009, 8:35 PM.
Posted by K. at 8:56 PM